James’ latest F1 car has been a long time coming! It’s the Tamiya 1:20 Camel Team Lotus-Honda 99T. The kit itself is the original release from 1988 which is so old it contained the tobacco decals on the standard decal sheet!

The standard kit has been modified with the addition of the Studio 27 photo-etch set, lots of carbon fibre decal sheet, wires, tubes and lots of other little extras, some scratch built. Seatbelts were added too. 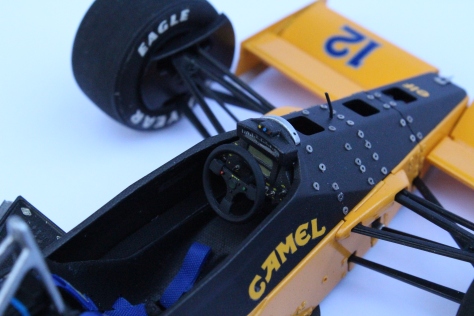 This car was driven by Ayrton Senna in 1987. This was the penultimate Formula 1 season for turbo cars, and the Lotus and its Honda engine was particularly suited to street circuits. Senna won two F1 races during the year, at Monaco and Detroit, and these would prove to be the final two races won by Team Lotus after a long and illustrious history in Formula 1. Senna would leave Lotus at the end of the year and join McLaren, beginning his famous rivalry with Alain Prost. Lotus would continue with Camel sponsorship until the end of 1990 as they gradually slipped down the order before pulling out of F1 completely at the end of 1994.

With the additional detail added to the kit, the main body shell was left off and displayed on homemade paddock stands. As well as the photos here, check out the full set on Flickr, in lovely high resolution: https://www.flickr.com/photos/119092223@N07/? 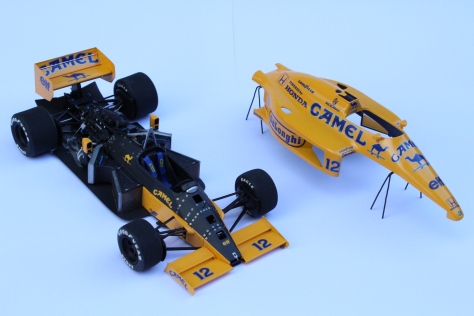