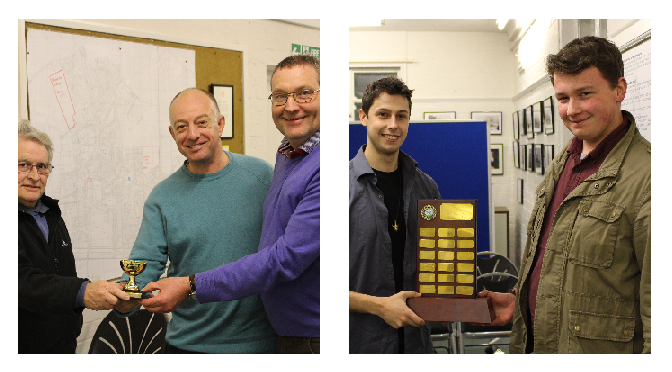 Along with the AGM, the January club meeting is also the point at which the trophies are awarded to their new owners – temporarily at least, they’ll have to give them back next year, unless they win again! For 2015, we had new faces all around.

Rob French won the main competition trophy having collected the most points over the course of 2015. The competition is run every other month – each club member can enter up to two models and everyone gets a single vote to pick their favourite of the bunch. One vote equals one point and the member with the most points after the final competition month in December is the winner. For 2015 it was Rob, who has plenty of years left in him yet to carry on wow-ing us with his brilliant, innovative dioramas and ideas!

In addition, the Most Inspired Modeller Award, a trophy that recognises special effort, improvement and/or overall passion for the hobby was jointly awarded to Tony Gill and Craig Wilcock. Tony has built many kits over the years, including many cars, but his real passion is boats, and his hand made efforts are always mightily impressive. Craig’s passion is armour and he’s produced some very fine work over the course of last year and so both are deserving winners.

Congratulations to all three winners from everyone at the club! All richly deserved, and now it’s time for the rest of us to try and get our own paws on those trophies this time next year. The bar has been raised!